Dr. Tom Habib is a clinical psychologist from San Diego, he has written several papers and is engaged in researching intimacy from an integral perspective. He will present „Lessons from the Collective We-Space to help Intimate Couples” in the Relationships and sexuality section at the 3rd Integral European Conference on 22-27 May 2018, in Hungary. Tom helps Couples to Achieve 2nd Tier Space in the presentation at IEC 2018. It will include specific steps you can take with your intimate partner to float into an integral couple stage. The map called The Couples Line of Development (see chart) elucidates predictable stages of growth and obstacles. 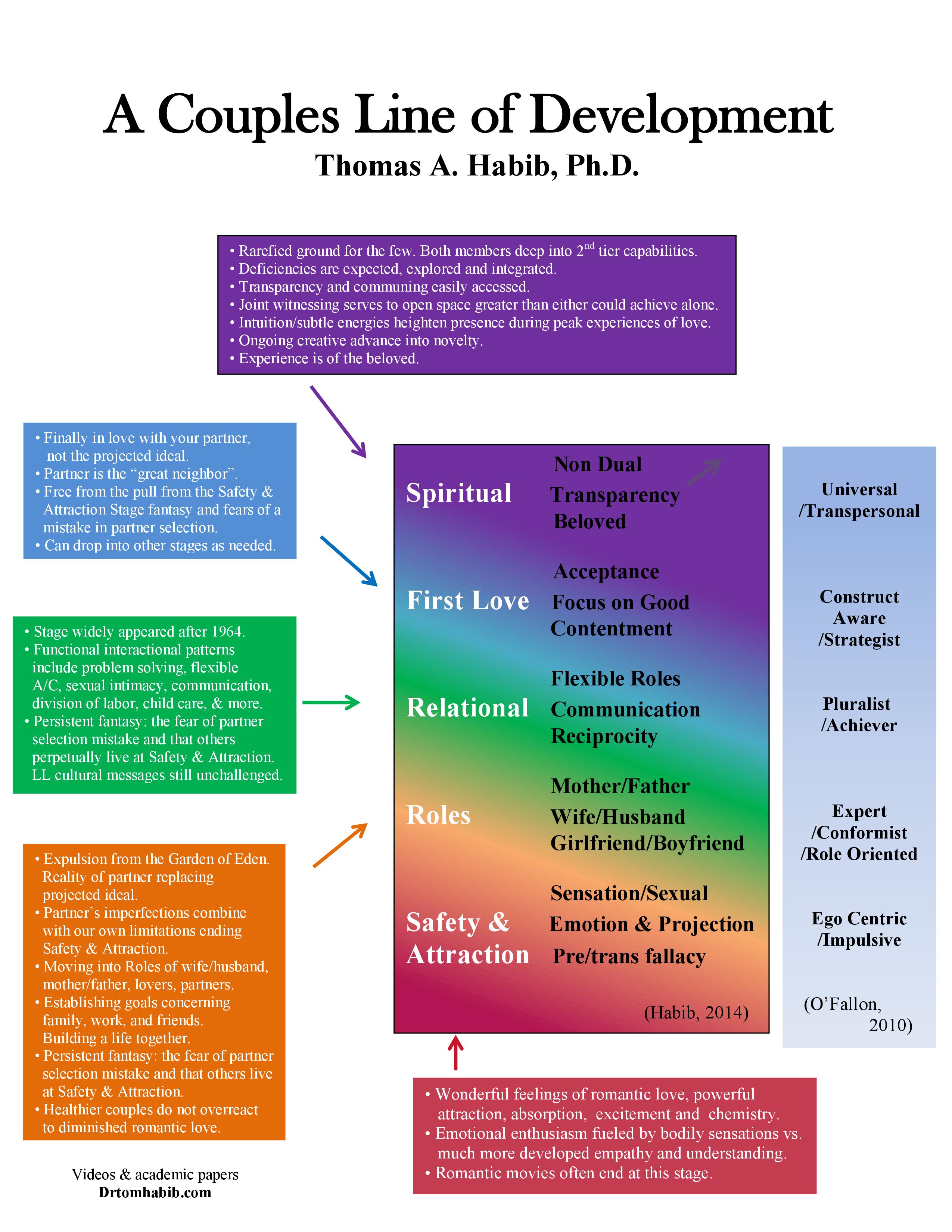 At the lower end of the Couple Line (where almost everyone inhabits) is a pernicious pre/trans fallacy (ptf2, elevationism) originating from the LL quadrant causing folks to look in the wrong direction for intimacy. The two persistent fantasies of the 2nd and 3rd stages are:

Popular culture drives these fantasies and we are gorged in an erroneous suggestion of the sustainability of early romance. Unmistakable and unrelenting LL messages in advertising, movies, romance novels, fashion styles, plastic surgery and a highly eroticized and romanticized interpretation of relationships perpetuates the two fallacies. Of course, no one gets to live at this chemically enhanced ideal. 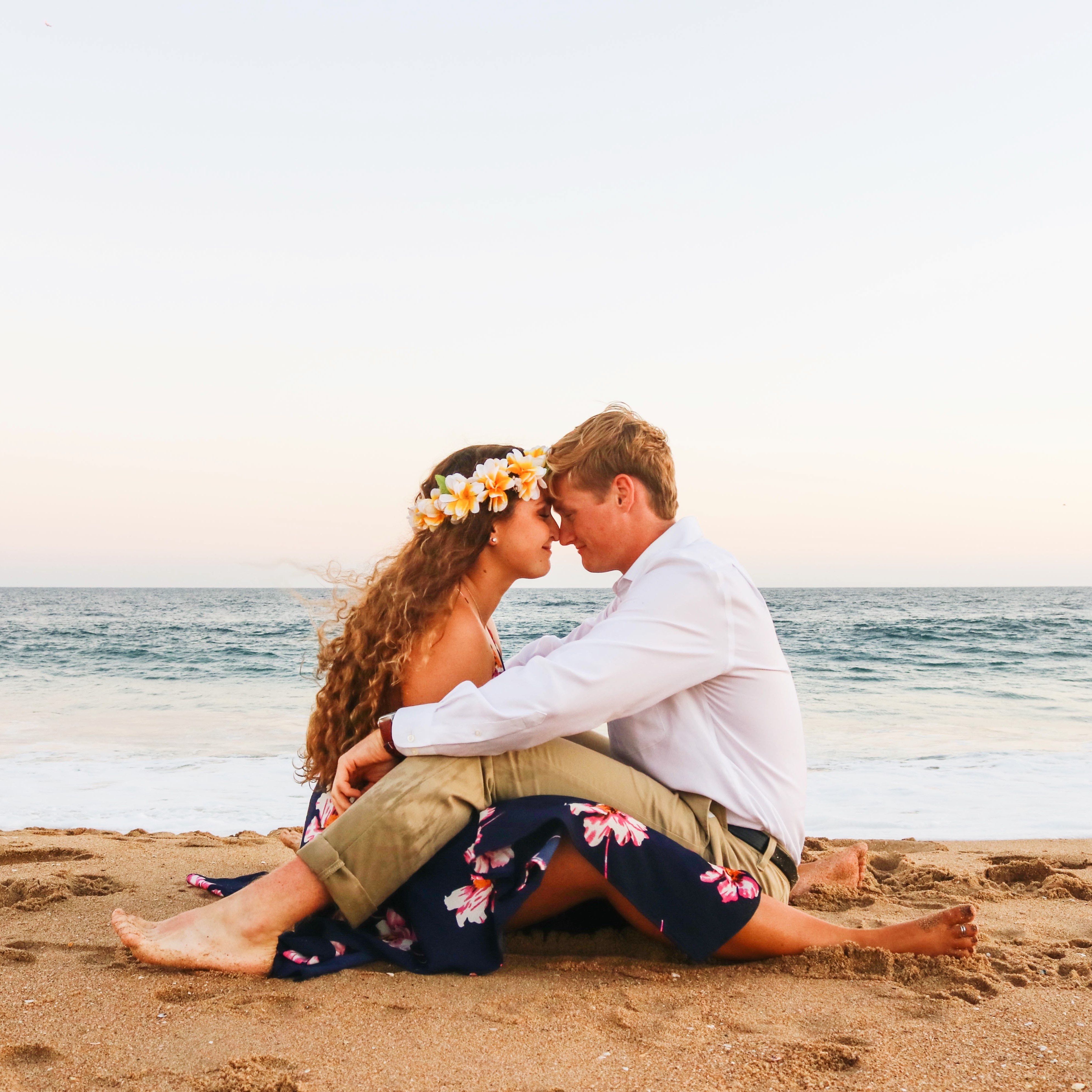 As mentioned the cultural message leads one to believe that we can return to the garden of early love, to the admittedly wonderful “subjective feelings heavily influenced by the sensory body” (Wilber, 2001). Other lines of development inform us that this experience is not “sustainable…or recoverable” (Wilber, 2006).

The result is countless couples unconsciously looking back, in the wrong direction in a futile attempt to recapture this experience. What is the cost of this societal fixation with this stage of love, one might ask? A black hole that effectively freezes progress for most couples, at ether the Roles or Relational stage of development while love stagnates or withers. Couples do not know where to look for the rich state experience in intimacy nor do they have a direction. By looking back to recapture what has passed rather than looking forward to what can be realized, many couples fail to reach the fourth stage, First Love.

At the other end of the Couples Line is Spiritual Love. It only becomes visible after we fully turn our gaze away from Safety & Attraction. Prerequisites for this stage is that both members of the dyad have completed large amounts of individual and couple growth work and each one can open into second tier space. In other words, they have grown-up, cleaned –up, and woken-up all contributing to the quality of showing-up. At Spiritual Love the relationship is easily capable of transparency. Interpretations are empathic and considered. There is a strong “clear and empowered authenticity” (Ramirez, et al., 2013) contributing to presence readily available and received as a replenishing gift. Each person has familiarity with the nuances of their inner world and are way beyond feeling ashamed or defensive. They are in an ongoing narrative that recognizes influences uniquely generated by their respective developmental histories.

There are useful re-occurring patterns and they clean-up those which inhibit presence. This interchange of information reshapes and positively influences remnants of earlier identities in a downward, dynamic, healing process (Forman, 2010). The narrative is continually supplemented via dialogue and rarely derailed by defensive road blocks seen earlier. New uncovering’s are sought by both members of the dyad and received as the gift they always have been.

The ease of the narrative is supported by well established LR interactional patterns capable of mediating intimacy, regression, cooperation, problem solving and disappointment at the Spiritual level. These well developed LR interactional patterns are capable of handling powerful regressions that challenge all previous stages. When archaic issues or patterns surface such as encapsulated identities (Noam, 1988; cf. Forman, 2010) they are responded to and soothed into recognizable patterns in the present. Feedback, divergent opinions and desires are received without disruption or chaos. Both members are aware of dyadic ambiance and their words are chosen to preserve it. The inauthentic nature of anger is recognized and rarely relied upon to convey complex or sensitive feelings. Partner or interactional deficiencies are neither catastrophized or allowed to stagnate as a source of hurt or rupture. Deficiencies are expected and noted. Time is liberally applied for reflection, decision making and for the emergence and integration of that held as shadow. This couple is aware of the steady flow of cultural influences which are held outside of them unless they decide it works for them. The process of relationship evolution is expected and viewed as an ongoing expansion of the “We”.

When this couple’s love peaks, they are using intuition and other subtle energies for exploration or to heighten presence. Both members of the dyad are simultaneously opening space into an area greater than either could do alone. Choices are woven into patterns that serve the couple in ways that were previously unrealized. The couple can co-create intuitive bursts of insight and revelations. The couple may make radical changes in where and how they live. Convention may be ignored and others may view the couple as out of control or irresponsible. There are consistent experiences of spiritually altered states, jointly witnessed cognitions, and morally guided concern for self and partner (Forman, 2010). They do not always need to nor can they verbalize what’s felt and witnessed. These are universal and illuminated experiences (Ramirez et al. 2013) jointly held as they creatively advance into novelty (Whitehead c.f. Gafni, 2012). 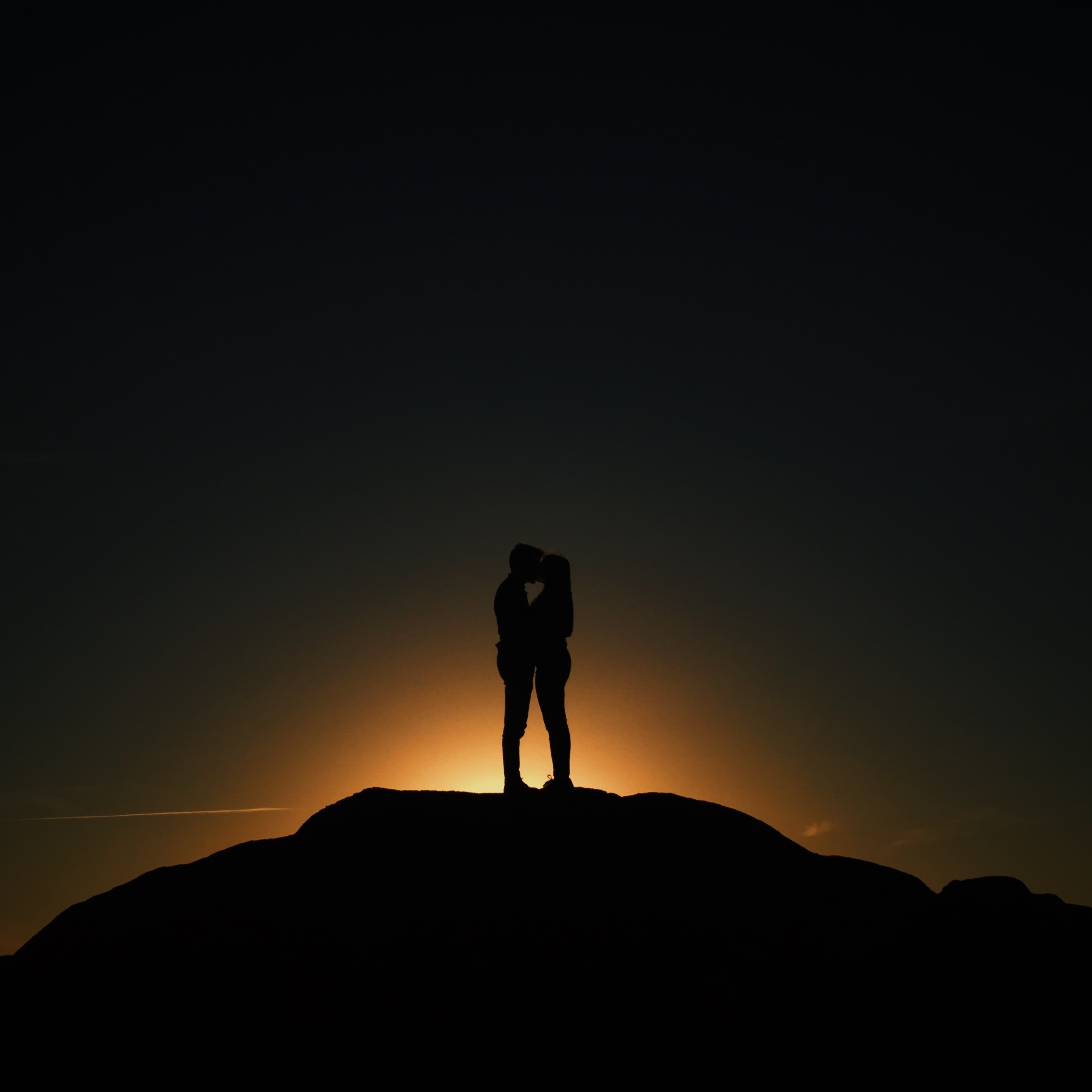 They move through never ending areas of exploration, as cosmic tourist, curtailed only by their finite individual energy. The non-dual periods of their connection allows them to experience the “One”, to sample the One Taste (Wilber, 2000b). The experience is of the beloved, the soul level of development. 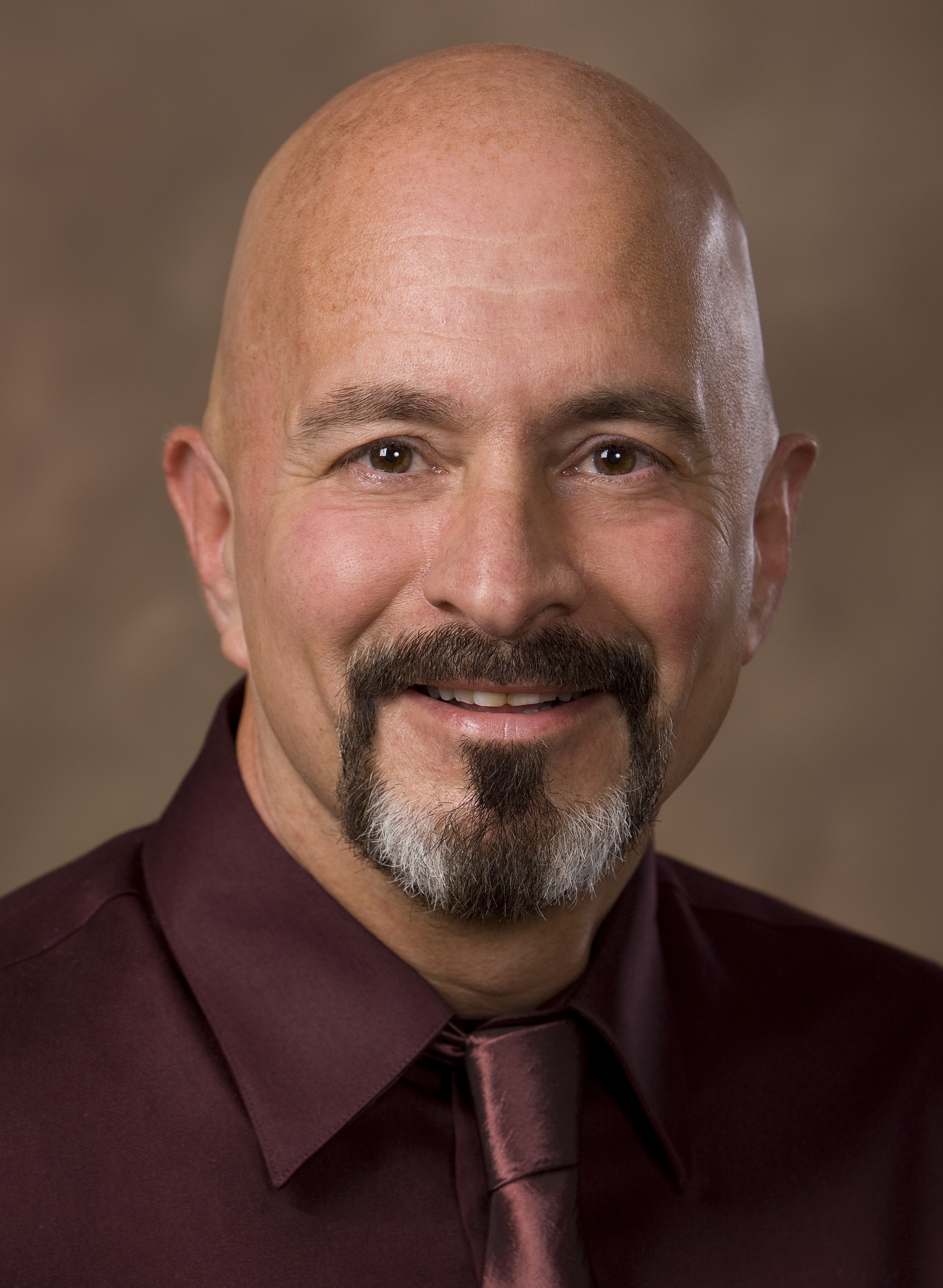 Thomas Habib was founder and managing partner in a private group practice for 26 years. He is also adjunct faculty at Center for Integrative Psychology in the California School of Professional Psychology, San Diego. As Physician Well Being Chair at a local Hospital he applies integral principals and state experiences in monthly presentations. He is currently developing We-space experiences at San Diego Integral and utilizing these findings to help intimate couples develop state experiences.